The Last Shots at the WTP4 Vote

As expected, WTP4 passed on a 4-3 vote.  Cole, Leffingwell, Martinez, and Shade voted yea.  Morrison, Spelman, and Riley voted nay.  It was a very civil and interesting discussion that mostly focused on risk management.   Concilmembers Spelman and Shade delivered the most substantive remarks for each side. 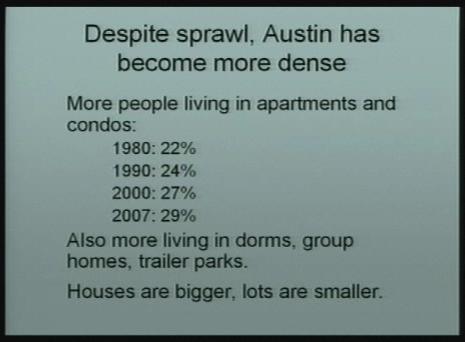 Councilmember Spelman narrated his risk analysis presentation (discussed in this previous KAW post).  The key message: peak day per capita consumption is trending down (discussed in this previous KAW post) and there is a 1 in 20 million chance that this is not a trend.  He explained the trend as the result of smaller lawns due to housing density.  I’ve reproduced the explanatory slide above.  According to CM Spelman, this trend gives us significant wiggle room because the risk of demand exceeding available supply of capacity did not exceed 10% until a decade from now in his projection.   He argued that a rate hike in the middle of a deep recession is painful.  However, as good as his presentation was, CM Spelman overlooked the probability of unexpectedly high population growth, which would increase the risk sooner.   Further, there was no analysis of the relatively lower rates that would be achieved due to the lower construction costs available now. Finally, the rate hikes would not be instantaneous and the issuing of debt for public works during bad times is effective counter-cyclical policy.

As the perceived swing vote, Councilmember Shade (pictured above) explained that her risk tolerance was lower than that of  the WTP4 opponents.  She did not quantify her risk tolerance to the extent CM Spelman did or outline how her assessment was superior.  One has to admit that deciding tolerable risk can get subjective.  She did point out that no one denied that the plant was going to be necessary eventually.  While she did not fully articulate the utility’s argument that this is potentially the cheapest time to buy capacity, it was implicit in her analogy to insurance.  To summarize, she indicated that she wanted to buy the insurance before problem arouse and it became harder to compare and negotiate.  She also subtly critiqued the lack of constructive, actionable alternatives and the lack of bargaining by opponents in the environmental community.  In an interesting digression, she pushed back on the lame self-aggrandizing of our green policies that Austinites can fall into.  She expressed a desire to serve as a “bridge” with the environmental community and work on making Austin’s green commitments in areas like conservation less shallow.

1 Response to The Last Shots at the WTP4 Vote