Here’s the preliminary map that might rule us all (in Austin):

Below are some preliminary thoughts on the implications of the map.

As a center-left person that believes in government solving problems, I am concerned that local policy might swing significantly towards the right or nihilism if we get Tea Party-tinged Republicans onto council.

Here’s a map visualizing the candidate vote share for the County (not City) in the last presidential election.

I assume that the new council cycle elections will be relatively less Democratic than the presidential year.  So, it seems that two districts will lean towards conservative council members.  It seems that another two to three will be competitive/lean conservative.

We can’t say with certainty, but it seems likely that council is about to shift in its ideological composition towards conservatism.

Below is a table detailing the demographics of the proposed districts. 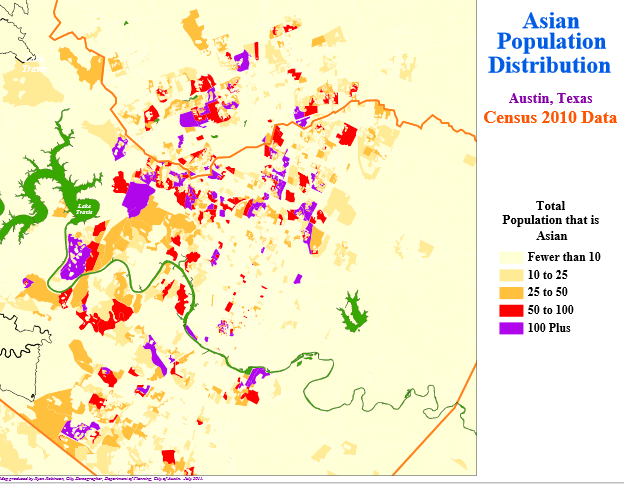 Hispanic descriptive representation is most interesting.  There are two districts with majority Hispanic voting-age population plus three additional districts with substantial Hispanic voting-age populations.  Depending on turnout rates and level of ethnocentric voting, council membership could be much more Latino in the short-term.  In the short-term, the district design is definitely high-risk/high-reward for Latino descriptive representation.  In the long-term though, as Austin becomes majority Hispanic, the benefits of single-member districts for Hispanics are less certain on both substantive and descriptive grounds.

This is likely to be a source of significant contentious public input from the community as it is precisely the type of dispute that agitates existing highly-vocal-and-organized groups.  For example, Mueller residents requested being placed in an East Austin district.  Inevitably, some of the boundary decisions cut up established neighborhood associations, block watches, etc.

The transition to geographic districts introduces several risks: nihilistic conservatives, stridently ethnocentric activists, even more parochialism in neighborhood land use decisions.  Constructive Austin civic leaders should anticipate these problems and advance meaningful solutions such as strong mayor and reforms of the land use code and process.  Going back to at-large is not an option.

Intentionally or not, the map packs the bulk of high-demand residential areas into one central district and adjacent East Austin district.  Perhaps ward courtesy will take hold; but if it doesn’t, the other eight council members will have an incentive to reduce tax bills and increase housing supply by over-riding local concerns and accelerating density in those districts.

I wouldn’t be surprised if many of the leading council candidates are non-committal or outright skeptical of urban rail investments given past elections and the geographically-targeted nature of the initial urban rail sequence. 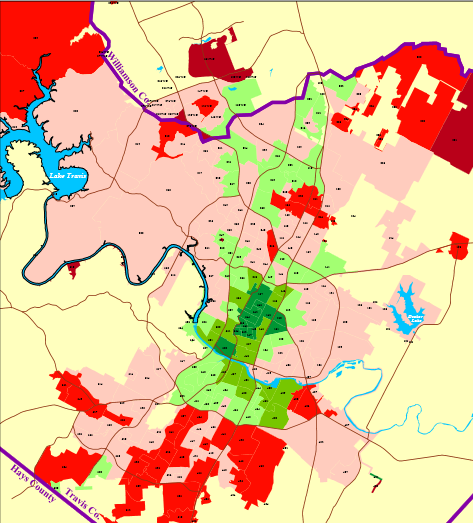 In the short-term, this will be a headwind for rail. In the long-term, this is the likely future of citywide public investment politics.

This entry was posted in Democracy Reform and tagged redistricting, single-mem. Bookmark the permalink.

3 Responses to Preliminary thoughts on the preliminary map