A new City budget is being debated. Here are five key points that help clarify the meaningful choices policymakers face.

1. The City is not the big property tax bill.  It’s AISD.

A lot of consternation about the cost of local government focuses on the City. It’s certainly a major talking point by many advocates and Council candidates. But in terms of property taxes, the public schools are the real driver of property tax costs.

If one is interested in making significant cuts to property taxes, then AISD is the place to focus. I suspect the reason this reality is not popular amongst Austin’s political class is because Austinites are not enthusiastic about cutting spending on teachers.

2. The big City bill is utilities.

Austin is a city of renters. It also has many working poor folks as a result of being a service economy hub in Texas. For the “typical” Austinite, the biggest City bill is actually utilities. In Austin, both electricity and water are municipally-owned and operated utilities. 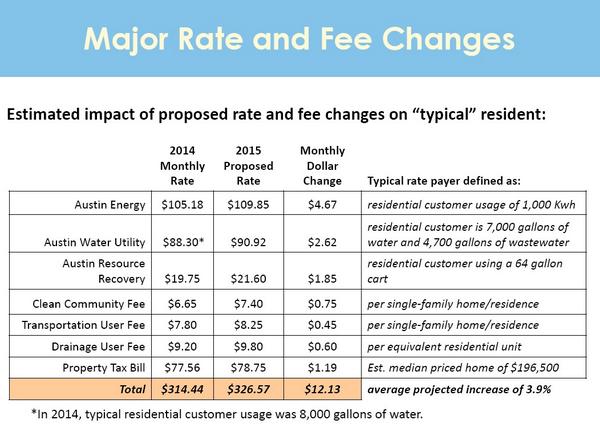 There is a certain set of Austin policy debates – such as economic development incentives – that consume a lot of political oxygen but are ultimately inconsequential in terms of the actual dollars Austinites send City government. Ensuring cost-effective utility operations probably isn’t as sexy as debating the role of corporations in society, but it’s more materially important to the cost of City government.

3. The other real City cost issue is public safety.

The federal government is often described as an enormous insurance company with a huge military. This description is helpful in contextualizing the relatively tiny impact of proposals such as cutting items like federal education or TANF on the overall fiscal condition of the nation.

Similarly, the City of Austin is basically a couple of utilities with a large public safety force.

Anyone serious about reducing the cost of City government must ultimately address the size and focus of our police, fire, and EMS departments.  This in turn requires a set of politically difficult choices: reduce the number of personnel per capita, pay personnel less, or both.  Austin’s growth streak makes the expansion of both force size and staff compensation viable. This will likely change as our growth decelerates or if we have another downturn (e.g the 80’s slow-down or the 90’s tech bust).

Candidates and advocates – but candidates in particular – shy away from discussing any real change to the public safety cost structure. With the exception of Council Member Bill Spelman, few of Austin’s leaders even want to entertain the topic. However, we can prepare for that eventual slow-down or tough downturn by beginning to define what public safety ‘value’ means beyond maintaining a benchmark per-capita ratio or response time.

For example, what is our expected property crime level given our underlying demographics? Given our level of spending, should we be performing at the observed level or not? In the event that we are under-performing given our investments, then it might make sense to request operational change. In times of economic distress, it would also be easier to avoid bloat.

4.  Healthcare & pensions are everywhere and nowhere.

The City’s expenditures for healthcare and pensions are being accumulated today but will be paid in the future.  The way our budget is discussed and presented obscures this.  For example, the decision to hire additional staff is discussed in terms of the current year’s budget impact, but the net effect on healthcare and pensions given the likelihood of position retention and current cost trends isn’t mentioned.

One way to reduce the hardship of city costs is to adopt a more ‘progressive’ revenue structure. This means that those with lower incomes or assets pay lower rates so that their relatively limited income still can ‘make ends meet’.  While the City and its utilities are somewhat constrained by state legislation, there is a universe of block rates, means testing, targeted relief programs, fee pricing, and discounts available to create a progressive revenue structure.

Further, a progressive revenue agenda could also entail correctly pricing environmental externalities into service provision. Our current utility rates do this to some extent, but there’s more to be done; for example, our current revenue structure incentivizes sprawl. Policymakers, candidates, and advocates will mention this goal from time-to-time, but the City does not measure and report it and I have not seen a comprehensive plan on this issue from any leader.