The Homestead Exemption debate in 2 minutes

A City of Austin 20% homestead exemption is a tax shift policy that is likely to get a lot of attention from the incoming City Council. Here’s what you need to know.

The 20% homestead exemption (HEx) reduces the assessed value of one’s primary residence by 20%. This is the maximum allowed by the state. The taxable value reduction decreases the taxes owed on a primary residence. A home assessed at $200,000 would only have a taxable value of $160,000.  As a result, HEx shifts overall taxation towards commercial and rental properties. The City’s Finance staff estimated HEx revenue loss at $36 million – equivalent to the entire 2o14 Austin Public Library budget – given current assessment and tax rate levels. The loss can be made up through spending cuts or an increase in City taxes and fees.

2. Will it increase Austin’s ‘affordability’?

No. For the overwhelming majority of beneficiaries, the reduced property taxes will not represent a meaningful share of their income. For example, the median Austin homestead value is roughly $200,000. And the median income is $52,453 (2012 American Community Survey).  According to the City’s finance department, the median household would see a $16 per month reduction under a HEx financed with spending cuts and a $10 reduction if property taxes were raised to make up the lost revenue. Either way, the tax reduction represents less than half of one percent (< 0.5%) of the median Austin household’s annual income.

3. Will it stop Austin’s assessment surge?

No. While HEx decreases assessed value, it doesn’t impact the drivers of Austin’s assessment surge: growth in the total number of Austinites with high incomes coupled with a lack of supply in popular neighborhoods. According to the City’s recent housing market study (PDF), there is significant pressure being placed in the middle of the market based on the competition for a limited supply of homes near employment centers. 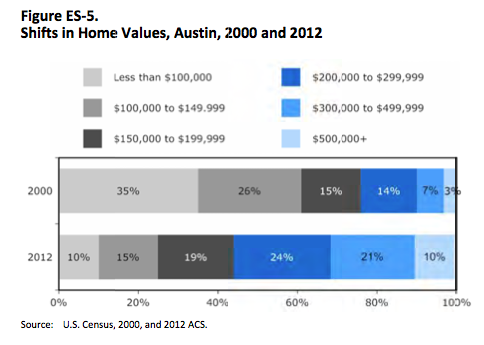 4. Why do HEx opponents call it ‘regressive’?

‘Progressive’ taxes take a greater share of income from those with higher incomes. A flat 20% homestead exemption means that a person with a $1,000,000 (one million) assessment gets 10 times as much of a monetary benefit as a person with a $100,000 house, regardless of their income.

One can see this play out in the district-by-district distribution of HEx dollars (via Austin Chronicle):

And here’s a drill-down into which districts receive a majority of the reduction dollars:

Many. If the goal is to create a shift in revenue policy that helps affordability, then it would be more effective to focus resources on those with the lowest incomes or Austinites going through extreme financial hardships such as unemployment. Austin Energy’s customer assistance program is an example of this approach. If the goal is to stop assessment surges, then addressing supply concerns through both land use liberalization and subsidized housing construction are actually effective policies. If the goal is a broader transformation of the City’s revenue structure so that homeowners and renters pay less and commercial property (e.g. large office buildings) pay more, then HEx would not be offered as an individual policy but as part of an overall package. As it stands, HEx is just expensive symbolism.