Proponents of ‘slowing’ or ‘managing’ Austin’s growth typically advance policies that will improve the City’s desirability. As a result, while their discourse concerns itself with growth deceleration, their implied solutions are actually additional sprawl and unnecessarily high prices. 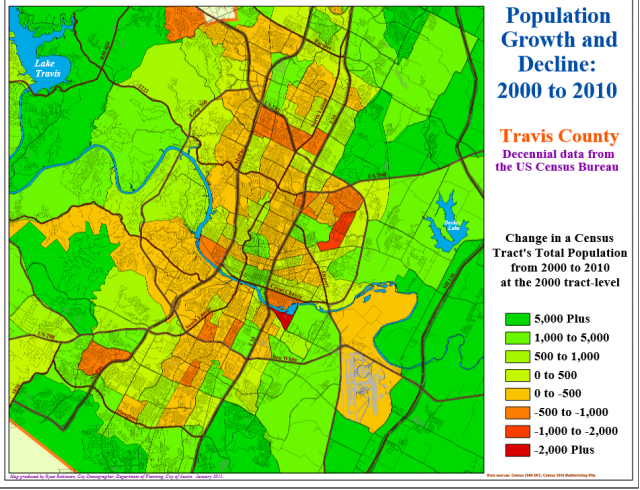 For example, in this interview, a new Council Member explains a desire to slow down Austin’s population growth. The policies the Council Member will prioritize are:

None of these policies will dampen the availability of jobs in the region or undermine the quality of life in the central neighborhoods experiencing assessment surges. If anything, these policies promise to generate a tiny increase in demand for high-skilled labor while further constraining supply of housing in desirable homes near employment centers (e.g. Downtown, UT). Implicitly, this growth ‘management’ approach (if we can call it that) will actually result in a mix of higher prices and sprawl. This – as we all know – is the status quo.

While some of the new anti-development Council Members might push individual residential projects to have fewer units or even prevent a handful of them, the unit totals from said supply destruction are rarely significant in the City’s overall development pattern. Even highly controversial development projects like the ‘TacoPUD’ boiled down to a disagreement over housing for a few dozen people.  The addition of massive amounts of units at the periphery of the City is rarely controversial; competing for a greater share of regional population within city limits is completely off the table.  Therefore, the new anti-development Council members will continue to rely on high prices to ration the core’s housing and sprawl to absorb overall growth. To reiterate, this is the approach that is presently failing.

External forces might eventually create a real cut in demand for housing within the Austin core. An energy recession, sharp cuts to state government, a tech investment bust, and further professional services automation are just some of the macro factors that could overtake local policy and create an actual economic slump for Austin that decelerates tax assessment growth. But this is not a solution; deterioration of local tax revenues and increased unemployment coupled with the fiscal messiness of sprawl present their own problems. Just imagine maintaining our sizable public safety labor force with a stalled real estate market – your assessment might stop growing, but your rates might start climbing.

Anti-growth advocates should outline a policy direction that can actually dampen demand. If they can’t describe politically feasible demand-destruction initiatives, then perhaps it’s time to reconsider their approach to the City’s development. In her comments, the incoming Council Member likened Austin’s population growth to a “fire hose” and indicated a desire to “…turn that hose down some.” Unfortunately, the policies she outlined – much like the overall anti-growth policies of the status quo – are the equivalent of increasing the water volume while tightening the hose nozzle.