Adoption of a 20% homestead exemption (HEx) would shift City taxation away from affluent, low-density Council districts towards the middle-class and Latino neighborhoods.

The following visualizations compare each district’s share of tax cuts/revenue loss against several demographic factors.  The tax data sources are TCAD & WCAD files analyzed by Dylan Tynan; this work was featured in the Austin Chronicle.

In addition, demographic figures stem from Census and American Community Survey data analyzed by Ryan Robinson, the City’s Demographer.  Here’s an Excel file (XLSX) with the above data table; it is also the source of the visualizations.

Each blue dot represents a City Council district. On the Y-axis is the amount of revenue lost for each district as a result of HEx (the citywide total is approximately $36m). On the X-axis is the median household income for the district. The amounts are in thousands of dollars, so “$60” on the X-axis represents $60,000.

As the reader can see, HEx is a regressive re-allocation.  In ‘progressive’ taxation, a greater share of tax burden is allocated towards those with higher incomes.  HEx achieves the opposite of such an effect when examined at the district-level; the wealthiest district receives eight times (8x) the cumulative tax cuts as the lowest income district.  And remember, HEx also shifts taxation towards relatively lower-income renters, so they will experience increases in tax burden, as opposed to tiny cuts.

This scatterplot is the same as the previous visualization except that the X-axis now represents the poverty rate.  The regressive impact of HEx remains. 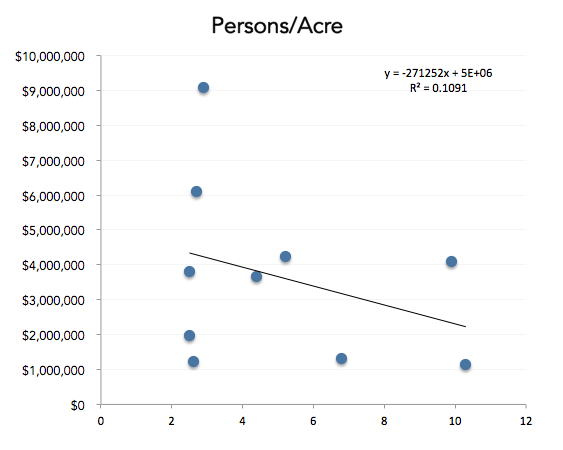 Given the political difficulty in encouraging smart, anti-sprawl land use within Austin’s neighborhoods, wise leadership would use fiscal policy to reward communities that allow density.  Unfortunately, HEx actually does the opposite by rewarding districts that have lower levels of persons-per-acre.

You can read more about the proposed HEx here.