How did Council do this year? A review of their policy-making.

Housing affordability is likely the most pressing local policy issue for Austinites. Oddly, Council achieved practically nothing on this issue in 2015.  On the supply front, modest changes to accessory dwelling units – that will amount to 200-500 new units per year – was the only initiative to jolt the supply curve.  On below-market rate housing subsidization, there were no new streams besides a $700,000 infusion for rental assistance programs targeting extremely high-need Austinites.

And that’s it.  There were a handful of zoning cases were Council opted for adding a few more units in high-demand areas, sometimes with income eligibility.   But for each of those there were countless projects delayed or made unfeasible by the City’s rotten land development code, neighborhood consultation rituals, and “slow growth” preferences of Council members.

Overall, it was a lost year for housing reform.  Council inaction reified our existing housing development approach: (1) cheap new sprawl construction that eats into affordability due to transportation costs coupled with (2) accelerating East Austin gentrification both due to a lack of supply in high-demand core areas and insufficient housing subsidy revenue streams. 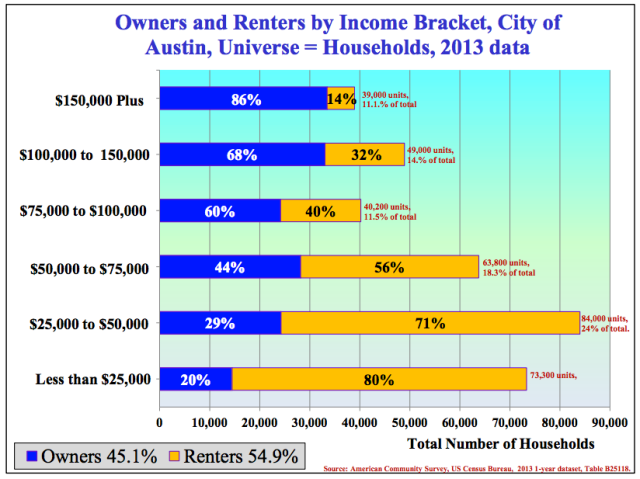 Council took no substantive action to support a mode shift away from car-centric transportation planning.  No new operating revenues for transit.  No policies to prioritize high-capacity transit in City streets.  No new capital infusions for bikes or pedestrian infrastructure. No comprehensive effort on re-pricing parking to support a transportation mode shift.

While many campaigned on “change” or “new” efforts to address transportation frustrations, so far, Council members have continued almost all transportation policies and priorities they inherited.  The Council representatives on regional transportation bodies (CAMPO and CapMetro) have repeatedly voted to re-affirm previous plans.

If anything, there’s been a slight deterioration in Council’s commitment to move away from single-passenger car trips as the prioritized mobility choice. For example, Council began the process of raiding a $21.8 million transit endowment intended for light rail to support pet district-by-district projects, many of which will be road repair & expansion efforts. And the inability to get housing and land use reform moving makes it hard to increase transit ridership given CapMetro’s dependence on cyclical local sales tax revenues for operating dollars.

Emerging efforts around pedestrian and bike safety on dangerous intersections save Council from an outright “F” on this one.

Along with land use regulation, the budget is one of the top two responsibilities of Council, if not the most important.  There were some smart moves, but mostly the budget was a disappointing cave to the erroneous belief that Austin’s affordability crunch is caused by City property tax levels on homeowners.

Specifically, the Council increased investment in social services by roughly $8 million dollars (alas, about a quarter of the boost was one-time only) and set aside $700,000 for rental assistance programs.  They also funded police body cameras.

There was relatively smaller expansion of public safety personnel; this category gobbles up 69% of the general fund. But the biggest new shift was the first phase of the percentage-based homestead exemption.  It’s on-track to being increased up to the full 20% from the initial 6% that passed this year.  This “Save Our Mansions” tax cut showers almost 50% of the cash on the top quarter of wealthiest households; the bottom quarter of household valuations get less than 10%.  Once fully in place, it will be bigger than the Austin Public Library budget, costing about $40 million per year in today’s dollars.  If you are wondering why there’s no bold progressive housing, mobility, or infrastructure investments it’s because we spent the money cutting taxes for the highest-valued homes.

Adding insult to injury, as the budget carving was concluding, a one-time $1 million dollar source was plowed into additional property tax cuts, instead of high-impact investments (e.g. housing homeless veterans).  Worse, this move decreased the property tax rollback rate, so the mistake will compound over time. Needles to say, this bizarre choice provides significant dollar relief only to homes with stratospheric valuations.

To summarize: Council was born on the fiscal equivalent of third base and has been talking like they hit a triple. They did not.

Council continued to slowly wean itself off Austin Energy’s transfer under the watchful eye of the Texas legislature. It expanded solar purchases. A key water transmission leak was resolved. There were water conservation successes, mostly related to higher prices.

However, there were both operational oversight and strategic issues that were left unaddressed.  Council’s oversight over utility operations remains a work-in-progress. Billing errors, improperly administered programs, and confusion about governance structure are just some of the operational issues.  As for strategy, many Council members campaigned on developing “new models” that allowed the utilities to be low-cost, financially healthy, and environmentally friendly. That’s also a work-in-progress.

Council started asking questions about the productivity of substantial increases in police spending.  This is a refreshing change from recent budgets.  They also quickly reacted to community requests for police body camera adoption. They quietly backed the City Manager’s efforts to prevent the City’s popular police chief from being poached by San Antonio.  Crime and emergency response are rarely invoked as “problem areas” in Austin civic discussion.

The new set of Council members is still developing an approach to how they undertake oversight of City operations.  In certain cases – such as a controversial employee training – they were very willing to take a strong stance on personnel and specific routines. In other areas, such as code enforcement, development review, utility customer service, and community engagement they’ve taken more indirect and potentially counter-productive approaches.  Sometimes this means passing more laws instead of fixing operations (e.g. short-term rentals). Other times it means outright punting (land development code complexity).

Council members were highly accessible in 2015. If anything, there’s a bit of burnout amongst staffers developing as a result of constituents’ high engagement expectations, substantial committee meeting volume, and a tendency to allow extensive public testimony at full Council meetings.  While they might not vote the way you’d like, this Council vintage has proven willing to sit there and hear people make their case.

All that said, Council might consider making some important changes (detailed here) to their committee and public testimony culture to broaden the share of Austinites participating as well as the quality of the information they personally hear.

This entry was posted in Energy, Fiscal, Housing, Public Safety, Transit, Transportation. Bookmark the permalink.
%d bloggers like this: