In the wake of an obvious mapping error, the CapMetro CEO dodges requests for data transparency and a public version control system. 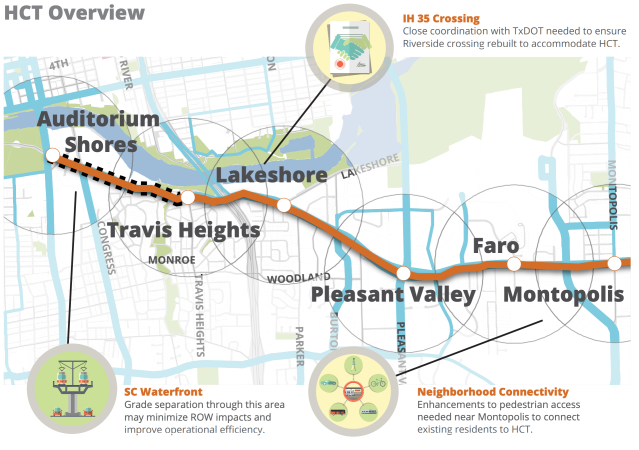 An overview of the East Riverside corridor, according to the latest Project Connect “flipbook”

A week ago, I wrote a piece highlighting some unexplained changes in the right-of-way constraint analysis maps submitted to a joint meeting of the City Council and CapMetro Board of Directors.  I urged the leadership of Project Connect to adopt some process changes to enhance trust. Specifically, I recommended that:

“As Project Connect continues, it would be useful for it to adopt a formal version control methodology for publicly-shared work products, as well as for its staff and consultants to document the reasons for changes between major work product versions.”

Additionally, I cautioned against once again relying on opaque cost and ridership models, as the transit agency did during the ’13-14 vintage of Project Connect.

The day after I published the piece, the CapMetro CEO himself responded to me on twitter. Here is the exchange: 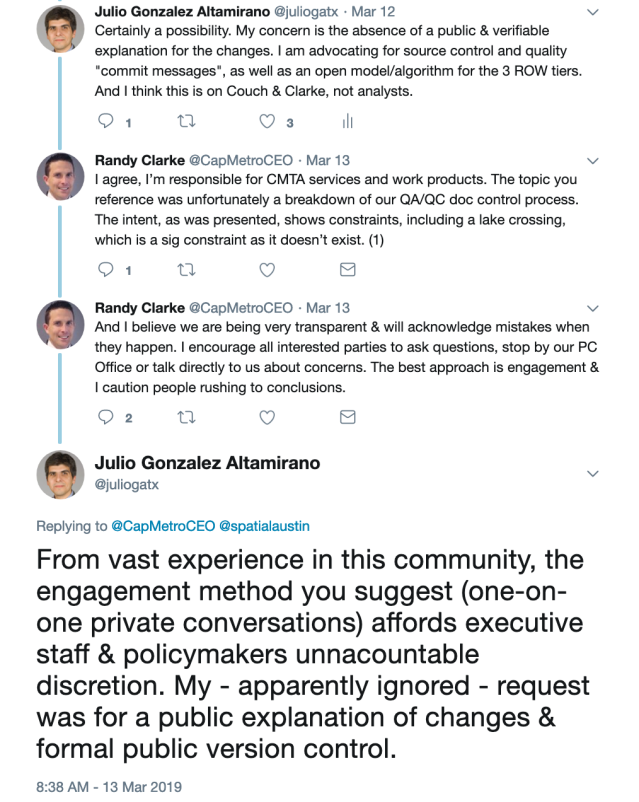 This past Friday, Clarke also issued a response to local journalist Jack Craver, who publishes austinpolitics.net.  Craver posted Clarke’s response on a post covering the map discrepancies. Here’s what Clarke had to say:

“The map that was displayed at joint work session was not a dramatic change from was [sic] presented originally in the flipbooks, which are publicly available on the Project Connect website. Regrettably, the map did not identify the updates that were made, and we’ve put in place a better process for quality assurance going forward. These updates were added as a result of community input given after the issuance of the flipbooks in October.”

It is unfortunate that both responses by the CapMetro CEO dodge the very specific requests for a public version control system with clear explanations for changes to major documents/maps/models, as well as my suggestion of opening the cost and ridership estimation models. Hopefully, an updated version of the map will be released soon, and accompanying documentation detailing what specific standards constitute each constraint category/color will also be provided.

What constitutes a “dramatic change” is in the eye of the beholder, so to speak. But, factually, the latest version of the East Riverside “flipbook” (i.e. Project Connect’s Phase 2 corridor-level analysis documents) does not have a bridge crossing, as this summary image from the document makes clear:

Undoubtedly, “community input” of some shape or other drives changes to the system map and its right-of-way constraints. Interestingly, that rather friendly-sounding descriptor has been used by past Project Connect stewards to diplomatically describe demands by either the University of Texas or the Chamber of Commerce.  Those that recall how the ’14 bond played out obviously could be forgiven for having a feeling of deja vu. While it’s not guaranteed that the ’14 East Riverside-Highland route proposal is about to be largely resuscitated, the insertion of the bridge-crossing stemming from “community input” is a pretty strong indicator.

If the leaders shepherding the current vintage of Project Connect want to build trust with highly-engaged citizens, they should adopt a public version control system, as well as open their data and models.  Otherwise, the continued invocations to “engage” with black boxes seems like disingenuous attempts at public relations instead of genuine attempts at allowing citizen-based contributions to their self-professed interest in robust quality assurance.