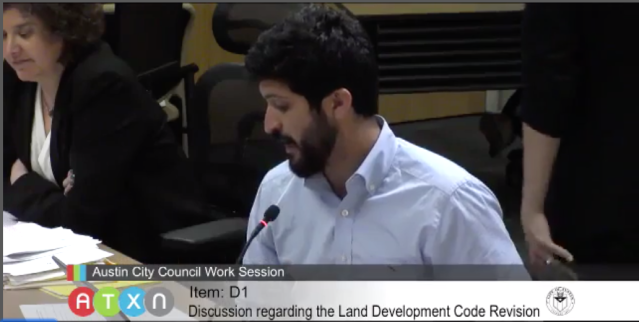 This past Tuesday, City Council held an extended work session to discuss and attempt to iron out differences on the new land development code. Procedurally, Council’s plan is for the body to vote on a set of drafting instructions to city staff at it’s next regular meeting.

In the past, I’ve pointed out that City Council does not have a validated method by which to estimate the effects of providing housing entitlements. Alas, City Council did not choose to validate its “Envision Tomorrow” tools (ET) and will continue to use said method for calculating housing capacity.

After Tuesday’s work session, the emerging consensus on capacity appears to be:

If you multiply each of these factors, you get a target of 405,000 units of new Envision-Tomorrow-flavored housing capacity.  City Council would expect staff to develop a proposal that implements their building form and zoning mapping preferences in such a way that it approximates that capacity target. But it would be a surprise if they came back with a proposal that was substantially below or above that capacity target.

So, what’s the problem?

For starters, the capacity multiplier is still low. It’s better than the 2x that was the rough consensus at the end of the previous iterations of CodeNEXT, but still insufficient. For example, Seattle recently passed a broad upzone (“Mandatory Housing Affordability”) that boosted the 3.2x capacity they had on the books upwards towards 4x.  Given the uncertainty around the validity of the ET methodology, 4x is a prudent, risk-minimizing choice.

Similarly, 13,500 units per year is too low. That figure is based on the Strategic Housing Blueprint (SHB). However, the SHB didn’t include an initial boost in production to restore affordability and did not adopt a growth rate that reflected the region’s absorption of residents that would prefer Austin housing if it was more affordable. 20,000 units per year would be a reasonable annual target once these SHB blind spots were addressed.

But the most substantial problem is the assumption that this code will be replaced in a decade. Unlike the other two factors, this assumption isn’t derived from a complicated estimate. It’s a straightforward guess based on established patterns of local political behavior.  And almost no one involved in or paying attention to the CodeNEXT process believes that this code will be replaced in ten years. A duration closer to 30 years – which is the age of the current code – seems much more reasonable. Even if you keep the conservative 13,500 units/year and 3x multiplier factors, that would increase the required capacity to 1,215,000 units.

In all likelihood, most Council Members are actually well aware that they are headed towards the adoption of a new code that features substantially lower capacity than what is needed to meet the housing affordability, environmental sustainability, and transportation mode shift goals they themselves have endorsed. The awkward and unrealistic embrace of a 10-year timeline provides a smooth political solution to the fear of getting once again trapped in a morass of political pushback. How long will the modest boost in capacity envisioned by Council slow price increases? How will future voters and elected officials react to the shortcomings of a low-capacity rewrite? Those questions deserve a public vetting by Austin’s policymakers before a new code is adopted.