The Austin Strategic Mobility Plan should be the focus of next year’s City transportation bond, not (necessarily) Project Connect. 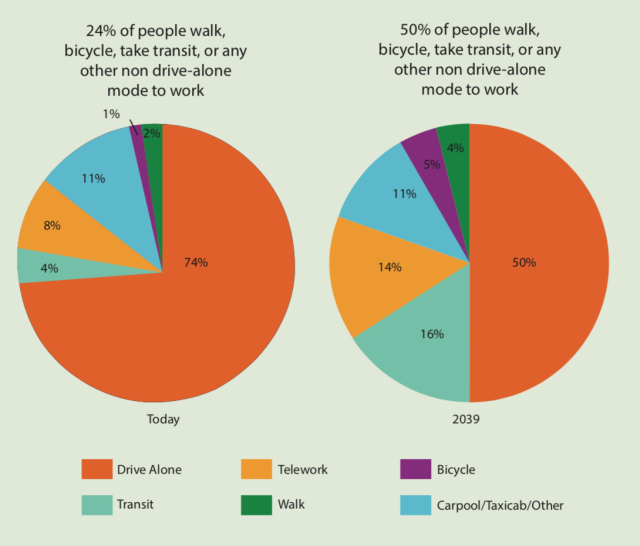 Presently, there is an expectation that City Council will place a substantial transportation-focused bond on next year’s ballot. Said bond referendum would take advantage of the favorable voter demographics provided by a presidential election featuring a local anti-Trump wave.

While not formally decided, there is a consistent assumption by public servants and the most active transportation leaders in civil society that funding the local portion of the Project Connect Orange and/or Blue Line project plans would be the core of the 2020 bond.

These plans would be adopted as Locally Preferred Alternatives (LPAs); the Orange and Blue Lines are considered the leading options for high-capacity transit investments, though there are also seven other transit “priority” routes that are more modest and do not require an LPA vote.

Funding an HCT LPA is the wrong priority for City Council to fixate on in crafting the 2020 bond. Said fixation is the result of process inertia instead of a rigorous examination of how to achieve the primary goal of the Austin Strategic Mobility Plan (ASMP).

As a reminder, the Strategic Mobility Plan set a 50% non-single-occupant-vehicle (SOV) commute mode share by 2039 as the City’s primary mobility objective. For many reasons, this is the right metric to guide the City Council’s transportation decision-making.

Given this metric, one would expect the 2020 bond would feature a mix of capital projects that are politically feasible “bang for the buck” producers of mode shift away from SOV.

So, are the Orange and Blue Line those types of capital-efficient mode shift producers?

If the Blue Line ridership and cost numbers are similar to what they were in 2014, it’s quite unlikely it would produce mode shift at all, and could actually lead to a decline in CapMetro’s productivity if light rail (LRT) is selected as the mode. There are several ways one could assemble the existing estimates of the light rail version of the Orange Line that produce both high ridership and a more productive system sometime in the 2030’s. But it would cost a lot (from $1.5 billion to $3 billion depending on the details) to produce a productive version of the Orange Line. And it could take some time to boost system productivity depending on the quality of bus service replaced and the land use provided by the City.

It’s quite possible that the most capital-efficient mode shift projects will be found outside of one blockbuster HCT project and with a broad portfolio of relatively cheaper projects, including:

The strategic dilemma presented by investing in bicyclists, scooter users, and pedestrians is that these modes offer cheap initial mode shift gains, but can’t offer more than 3 to 5 more percentage points each.  Transit will eventually need to be the workhorse mode, which is why the ASMP envisions it providing 12 of the 24 percentage points needed to cut down SOV commutes from 74% to 50%.

For example, building Austin a world-class protected bike network could, realistically, cost $400 million and lead to a 4% commute share shift, establishing cycling at 5% of commutes (today, it’s at 1%). But that’s likely the ceiling for cycling in Austin due to the fitness level required and types of trips bikes are good for. In fact, most of America’s leading bike commute cities hover in the high single digits.

At some point, reducing SOV commutes requires much broader use of transit.

Will Austin need HCT to meet the ASMP goal? Not necessarily, if the Council and the County can somehow coordinate land use, road right-of-way policies, and other capital projects to get the most productivity out of conventional buses. But since that is unlikely given recent history, productive HCT projects will eventually be needed to allow the system to move more people for less each, creating a virtuous spiral that bolsters the service levels that can be achieved without new operating funding streams.

To decide how to proceed, Austin’s policymakers need to jump off Project Connect’s existing inertia-driven path and begin to carve out an independent, public, and rigorous process that determines the most capital-efficient mode shift options available.

It’s possible that the Project Connect LPAs are some of those options. Perhaps the transit priority routes are superior options when it comes to capital efficiency. It would also be useful for Council Members and their allies in civil society to get a clearer hold on the size of investment the public is willing to support, as well as to check if the public can be educated about why theoretically BRT is a lower cost option to LRT and not – as those outside of the Project Connect bubble often hear – a ridiculously expensive version of a conventional bus that tends to creep away from HCT due to the cost of grade separations and the practical political impact of mode bias.

Ultimately, Council will be the one deciding what to put on the ballot. It would be beneficial for them (and their constituents!) to have a rigorous proposal focused on overall mode shift that is aligned with the City’s ASMP and Austin’s political needs, as opposed to the peculiar incentives of the Project Connect process and CapMetro’s governance.