Austin Contrarian was kind enough to point out the location of Austin Water’s demand estimate memo amidst a set of responses Council members Spelman and Morrison received from the utility. The memo – which was composed in 2006, includes Excel regression output, and remains labeled a “draft” – can be found here.  The memo was prepared by the firm of Alan Plummer & Associates. In a previous post, I raised a series of concerns with how discussions of projections and “regression” seemed to be unfolding.

Some might see this as vindication for proponents of the plant.  “Hey, if population does indeed reliably predict use, and the consensus is that population is going up, then we should build capacity,” proponents might conclude.

However, a closer inspection of the memo and the data reveals a very important rejoinder to the above view.  The consultants on the project observed that the slope of demand decreased after Austin Water implemented a conservation program in 1983.  As a result, they break up their regressions into two distinct periods.  An alternative might have been to create a control or binary “dummy variable” which would have allowed for the quantification of the impact of the conservation policy change on demand. Even without this explicit quantification of the impact of conservation policy, it is clear that the relationship between consumers and their water use is substantially changing. 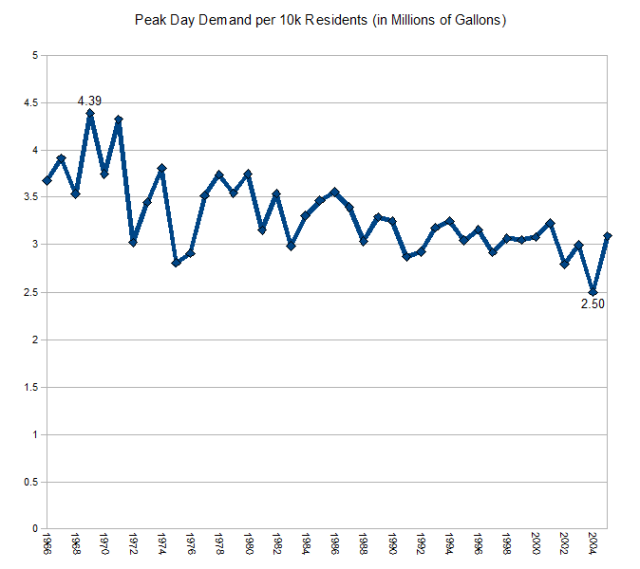 In the two charts above, I have traced the peak daily demand per 10,000 residents.  The first chart tracks demand for each year of data provided in the memo.  Clearly, the trend is downward with the highest peak rate being 4.39 and the lowest 2.50, a remarkable difference.   In the second, I use a five-year average to smooth out the trend further.  Again, clearly residents are using less water per capita on the peak day.

What’s the implication of all this? First, it is important to keep in mind that policy change or culture change can significantly reduce water use.  Perhaps further reductions can not be replicated, but it does not appear that the City or Austin Water are gathering the needed data or research capacity to make those evaluations. Regardless of what happens with the construction of this plant, the City and other public entities should improve their policy evaluation efforts.  A small investment of time in creating data gathering routines and of money in some evaluation personnel could significantly improve policy-making.

Second, from a more practical estimate presentation perspective, the recent lows of 2.50 MGD per 10k residents really should be used as the basis for an alternative scenario for policymakers.  Advocates of delay should point out that the current model misses recent usage because the 1984-2005 data often leads to a much higher per capita estimate than the most recent data.  Point out that the lack of controls for policy and culture change make it highly susceptible to miss inflection points, which is probably why the consultants broke out the data sample into two different periods.

Third, for advocates of the plant, a key variable to revisit is population.  The population growth estimates the consultant used are much lower than those provided by the City demographer to the Council during the WTP4 questioning.